BURLINGTON, ON, May 9, 2017 /CNW/ - Three local women were honoured at the fifth annual BMO Celebrating Women program in Burlington for their remarkable contribution to business and the community in one of three categories: Innovation and Global Growth, Community and Charitable Giving, and Expansion and Growth in Small Business. The program recognizes female leaders in local communities as part of BMO's commitment to drive the advancement of women. 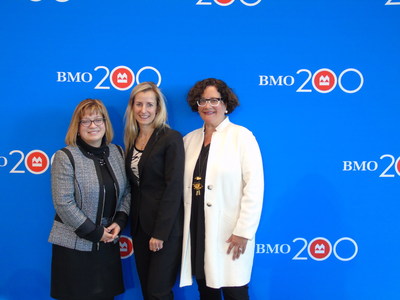 At the Burlington event, the following honourees were recognized:

"We're pleased to recognize these women for their hard work, commitment and the important role they play in the advancement of women in business, which is a key priority for us at BMO," said Julie Barker-Merz, Senior Vice President, Southwestern Ontario Division, BMO Bank of Montreal. "They've cultivated businesses and initiatives that have a deep, lasting impact and that inspire others here in the community."

The Celebrating Women program follows BMO's second Catalyst Award win for its industry-leading work to accelerate diversity and inclusion in its workplace and dedication to gender equality.

In addition, BMO has partnerships with organizations such as GroYourBiz, WBE Canada, Women Presidents' Organization, SheEO and Catalyst. It has also developed products that address the needs of its female clients, including the recent Women in Leadership Mutual Fund – the first impact investing mutual fund offered by a Canadian bank focused on gender diversity, and spearheaded studies around women entrepreneurs, such as A Force to Reckon With: Women, Entrepreneurs & Risk – an eye-opening report in partnership with Carleton University that debunked myths around the notion of women being risk-averse.

About BMO Financial Group
Established in 1817, and currently marking its 200th year of operations, BMO Financial Group is a highly diversified financial services provider based in North America. With total assets of $692 billion as of January 31, 2017, and more than 45,000 employees, BMO provides a broad range of personal and commercial banking, wealth management and investment banking products and services to more than 12 million customers and conducts business through three operating groups: Personal and Commercial Banking, Wealth Management and BMO Capital Markets.